Netflixable? Lovers turn on one another to figure out “What Keeps You Alive” 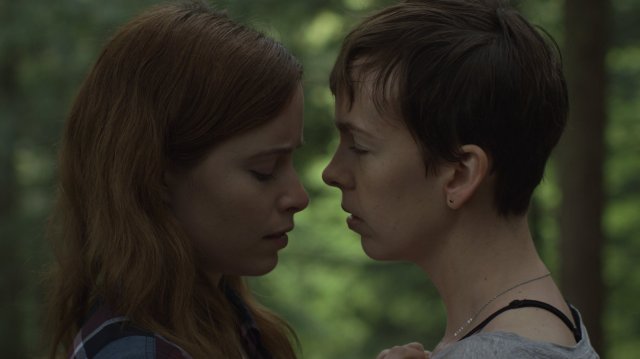 Thrillers by their very nature string you along. The good ones invite you to second-guess the heroine or hero, put yourself in that person’s shoes, collect your wits and think your way out of a life-or-death jam.

And the not-as-good ones? They manipulate, abandon logic and make you grope for reasons for “Why did he do that” “Why did she go back?” “What sane person would go down there?”

“What Keeps You Alive” sucks you in and lets you off the hook entirely too easily. Its set pieces seem to lumber along in slow motion. When one of them is a rowboat chase, well, that’s a given. Its finale abandons every rational thought a human being would have, even as the writer-director is having a smirk over how clever it is to hide a climactic confrontation. And hell, it’s got one of those “talking villains.” Need I say more?

Young marrieds Jackie and Jules show up at her grandpa’s “rustic” lakefront frame house in the wooded Canadian wilderness. Their get-away is coitus-interrupted by a neighbor, and that’s when Jules (Brittany Allen of TV’s “The Boys”) first starts to wonder, “Who IS this woman I’ve married?”

Jackie used to be Megan. But as she’s played by Hannah Emily Anderson, she with the “X-Men: Dark Phoenix” scary eyes, well you’d think Julie would have had a clue or two earlier, maybe when “Jackie” starts plucking out a modern murder ballad, “There’s a demon inside, BLOOD let it out” on the guitar.

Questioning that neighbor (Martha MacIsaac) when Megan/Jackie isn’t around just leads to more questions. Here’s a deal-breaker worth mentioning in couples therapy. When your partner says “I was cleared of any wrongdoing,” sounding like “that’s what my lawyer allows me to say,” run.

All the obvious bits of foreshadowing? Colorful “anecdotes” from Megan’s past, etc? Well, you’ll see.

Jules ends up injured and limping/rowing/pleading/fighting for her life from a very talkative psychopath.

I went along with this further than I probably should have. But the lack or urgency and Jules’ maddening refusal to take flight — we see mailboxes all along the road to the house, know at least “some” neighbors are at home — bugged me, right from the start.

There’s all this ominous Beethoven on the soundtrack, throbbing along as we wonder what Jackie — who rehearses panicked 911 calls the way others internalize Blanche DuBois — can say or do to explain her actions and the times she seems to abandon her own logic.

The performances are good, and the gay marriage twist seems a long way from the old “homicidal homosexual” stereotype. Sort of.

But the endless monologues — Jules diagnosing and narrating her injuries, aloud, for the audience, Jackie giving away her fake distress and switching to instant-threats early and often — punch holes in what would have been a tighter, tenser narrative.

Why tell us everything when good actresses can simply SHOW it? That’s something any filmmaker fretting over making a “not-as-good” thriller should mutter as a mantra, even if what they’re showing us grows more preposterous than fun.