Documentary Review: Animal lover’s devotion is “For the Birds” 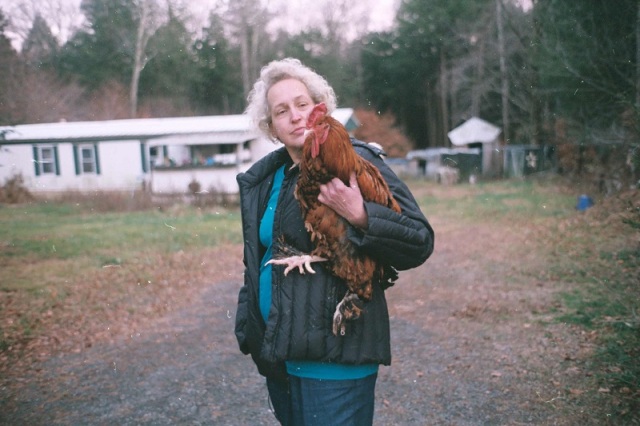 But it can be pigs. And in extreme, but seemingly more readily “diagnosed” cases, it can be tigers — large cats kept, by and large by rural, disabled hoarders.

“For the Birds” is about an Upstate New Yorker who developed a passion for living with farm fowl — turkeys, and as the song goes, “chicks and ducks and geese better scurry” when visitors to Kathy Murphy’s trailer and mini-farm in Wawarsing, N.Y.

But “visitors” are plainly rare in Kathy’s world. We may meet her and husband Gary in old home videos in the film’s opening scene, cooing over a lost duckling they’d had to take in. Ten years later, the place is overrun with animals that she’s bought and hatched, adopted or picked up — hundreds of them.

“Found a little duck in the yard one day, and that was all she wrote,” Kathy grins.

She loves her birds, gives each a name and picks up and hugs this duck or that rooster to underscore that affection. But she’s “overwhelmed,” others note. The county has taken notice. Husband Gary Murphy is scheming behind her back to get the birds moved elsewhere — some of them, ANY of them.

Richard Miron’s film doesn’t pretend to psychoanalyze Kathy’s mania for mallards, wood ducks, geese and the rest. She’s caring for them, but not all that expertly. She’s doing better by the fowl than she is for herself. Her teeth are a wreck. She’s estranged from their daughter over this, and Gary’s got to know where Kathy’s priorities are, and resent them.

“He knows that I would chose them over him!”

It is the way of such documentaries that things start out looking cute, quaint, eccentric and sweet, even if we see the words of the police report that underscores the trouble on the horizon.

Reasonable, patient, well-intentioned people from the Woodstock Farm Animal Sanctuary pay a visit and ever-so-gently persuade Kathy to let them take some of the more malnourished or eye-infected ducks and chickens to their big farm. Ulster County leaves this “problem” up to them. For now.

But something in Kathy’s cooperative, sympathetic yet increasingly manic manner tells us this is the easiest it’s going to be, relocating some 150 fowl from a place that might more comfortably hold a dozen.

Miron’s film sets up our characters, Kathy with her “Who cares?” what other people think attitude, Gary with his indulgent, “indifferent” and remote attitude towards the whole thing, a guy whose fondest “wish is that they was a little…bit further away.”

Her “hobby,” the reason she gets up in the morning, “It’s interesting, to say the least.”

We meet Scottish Sheila from the Sanctuary, and Elana and other volunteers, delicately negotiating the release of two turkeys, finding Kathy increasingly difficult to deal with, calling Gary inside the trailer (by phone) begging for him to intervene.

She gets angrier and angier, Gary turns more and more remote — “You think you’re going to grow old with someone…” and then a heavy handed SPCA coordinator with the county shows up, barks “I own this property right now. OFF the property!” and the film crew are chased off, a folksy but tactless “old country lawyer” named Bill brags about how she “takes better care of those chickens than Col. Sanders, or Tyson” and a boy prosecutor who hasn’t shaved yet face off in court.

The closest this charming films gets to “revelatory” is when the lawyers bicker over the label “hoarder.” Is there not one person who can point to what’s really going on here? Kathy seems reasonable enough, sane enough. Is this, pardon the pun, a dark turn in an “empty nest” syndrome situation?

Of course, there are no pat answers in a single-case/single person profile film like this. Films I’ve reviewed about Big Cat collecting visit scores of people, almost all on disability, filling some “control” and “strength and power” hole in their lives by keeping tigers and lions.

Maybe it’s as Kathy says, she just fell in love with them and had to have lots and lots of each species. But as “For the Birds” unfolds its increasingly bittersweet story and we see the problem and the destructive nature of the solution to it, one can’t help but wish there’d been a tad more attention paid to “What’s going through the bird lady’s head?”