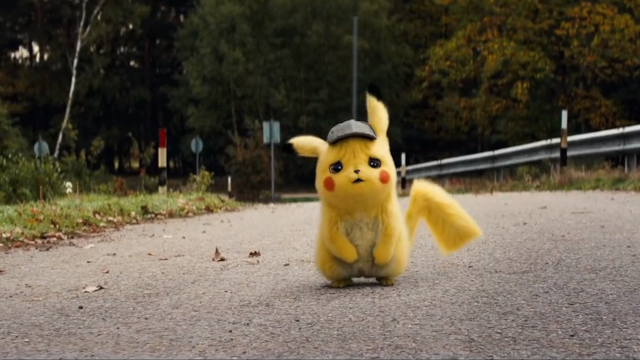 The key to Pokémon, we’re told in “Pokémon Detective Pikachu?”

“You have to be open to the experience.”

So say this about the live-action-plus-the-voice-of-Ryan Reynolds take on the game, the characters, the “universe.” This “Pokémon” does a better job of revealing the enduring appeal of it all, the treasure hunt, collecting, competing and “companions” (pet/helper) and never-ending supply of new and different characters to discover, pursue and “fight.” It’s built to be addicting.

No wonder a generation of Japanese stopped having sex. Who has the time with Pokémon and all the other bubbly distractions that pop culture has to offer?

This “Detective Pikachu” has impressive effects — a topographical terra firma-bending “earthquake” that stuns, an eye-candy-filled finale that revels in the digital production design of this alternate reality, “Ryme City” a neon and primary colored splashed combination of Tokyo, London and FAO Schwartz.

But the movie? Stuffed and overstuffed, a crushing bore that’s not nearly as cute as casting Canadian cut-up Ryan Reynolds as the voice of Pikachu suggests it might be.

Fanatics may embrace the endless parade of “Pokémon” — tiny gators and geckos, ducks, monkeys and dinosaurs with names like Psyduck, Mankey, Mewtew and many, many others, more than most of us could possibly imagine.

But this limp “story” will put the sentient to sleep, and there’s just not enough Reynolds wisecracks to stave it off.

In a world where people “catch” pokémon (“They have to choose you, too!”) as companions young Tim (Justice Smith) has outgrown that. He’s in insurance.

But a car crash claims the life of his estranged dad, so he has to travel to Ryme City to collect his things.

Dad was a cop, “one of the best” his boss (Ken Watanabe, collecting a check) insists. Dad was onto something. The only clue is in his apartment, a vial with an “R” on its label containing purple gas. Naturally, Tim opens it and gets a whiff.

That’s when he sees the Pikachu in a Sherlock Holmes deerstalker hat. But when this Pikachu talks, Tim doesn’t hear the “Pika Pika” burps and bleeps the rest of the human world hears. He picks up the dulcet, sarcastic tones of Ol’Deadpool himself, Ryan Reynolds.

“There’s no such thing as ‘Daddy issues’ without ‘Daddy.'” 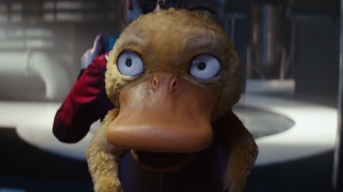 Smith is blandly game enough, interacting with a digital furry plush doll on his shoulder. Kathryn Newton underwhelms as a reporter-wannabe who is ALSO on the case, Bill Nighy is the oligarch who runs the TV network and the rest of Ryme City.

And all of them are just devices to get us to another scene jammed with all manner of pokémon, with a few fights, a few critters showing off their strengths and weaknesses and some nice explosions.

Reynolds presold this movie in the trailers and TV commercials — Deadpool wise-assery dressing up game contorted into a movie plot.

But his lines aren’t funny enough or numerous enough for that to be truth in advertising. Effects aside, irrespective of Reynolds, Pokémon is what Pokémon has always been on the big screen — pablum.

MPAA Rating: PG for action/peril, some rude and suggestive humor, and thematic elements.