Documentary Review — A hockey goon has his day in “Tough Guy: The Bob Probert Story” 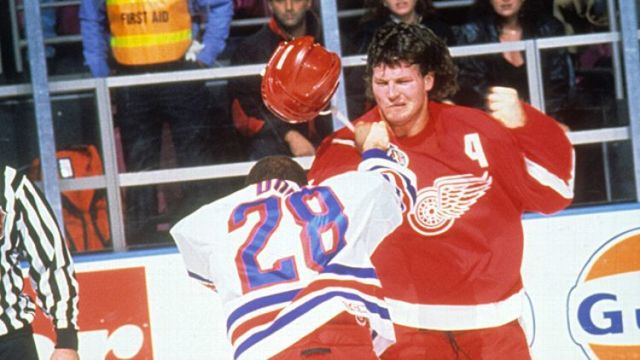 Bob Probert was a hockey goon from the Golden Age of Hockey Goons, a two-fisted brawler who made Detroit fans care more about the fights than the scoreboard when he skated for the Red Wings.

From the mid-80s into the early 2000s, the tall and bulky Probert was “The Heavyweight Champion” of the NHL. He scored some goals and never made it to the Stanley Cup, the National Hockey League’s championship series.

But he loomed large over his sport for over a decade. Probert’s career, as the new documentary “Tough Guy: The Bob Probert Story” reminds us, was measured in fights and penalty minutes, not in goals and assists and affixing your team’s name to the Cup.

And it was Probert vs. Tie Dormi, where even a “loss,” bloodied on the ice, earned a little Probert spin — “I didn’t get hurt. It wasn’t a solid punch. I didn’t get beat. He just got lucky.”

Geordie Day’s somewhat unwieldy film dwells on what hockey fans used to show up to games for — the fights — in painting a portrait of a Windsor, Ontario cop’s son who was taught to be tough, to never back down and never cry.

We get a taste of an unhappy childhood that never really ended, thanks to the sport’s way of identifying promising players young, taking them out of school and putting them in the junior ranks on their way up the ladder to the NHL.

Probert, at 6 foot three, over 200 pounds, with long arms and the permanent chip on his shoulder of a team “enforcer,” “protecting” his more vulnerable teammates, was a brute on the ice.

Watch him cheap shot a goalie or two and try to find sympathy for the guy. It’s hard.

In interviews over the years, he comes off as a foul-mouthed kid, a hulking child with impulse control issues and a drinking and drugs problem that started in his teens, put him in rehab a score or more times and landed him in Federal prison in Rochester, Minnesota, at one point.

Teammates, foes, family, coaches and longtime host of “Hockey Night in Canada,” Don Cherry, marvel at the brawls — two ungainly men wrestling and swinging on ice, on skates, covered in protective gear that would inevitably get torn off in the 30-100 second “bouts.”

When former teammate Bruce Bell declares, “He didn’t like fighting…he did it because he had to do it” in “protecting his teammates” in the film, it helps that this assertion comes before we’ve seen the man split a player’s helmet open with a stick.

“There was two sides of Bob, and you didn’t want to be on the wrong one,” a former foe notes. 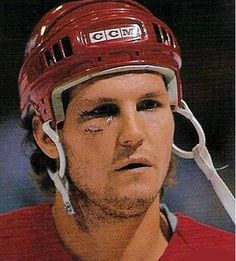 Day’s film touches lightly on the CTE (brain injuries) that can come from incessant bare-knuckle brawling, and on the many efforts to keep Probert sober, which his teammates and fans helped him to dodge.

We hear Probert boast of “fighting my way into the big leagues,” see him meet that goal and gain the infamy that let him meet the Carlson Brothers of “Slap Shot,” and D.B. Sweeney of “The Cutting Edge,” and hear Mr. T give him a shout out as “the toughest man on ice.”

But we also get a dose of the addictions that held him back, and a taste of Probert’s bitterness at being caught out drinking with teammates in a playoff series with Edmonton in which the Red Wings had a shot at playing for the Stanley Cup.

Keith Gave, the beat writer on the Red Wings for the Detroit Free-Press, is scorned for reporting on that incident and Probert’s years of run-ins with the law over his imbibing. Gave is more forgiving now, but not Probert’s teammates.

Filmmaker Day doesn’t make the movie’s hero very heroic, from cocaine to steroids, arrests to fights on and off the ice. He was “out of control” those who knew him admit.

But cut quite the figure, in his time. And he left a mark.

If the game is more civilized now, it’s thanks to the excesses of bullying brutes like Bob Probert. That’s a message Day doesn’t take the time to get across, leaving “Tough Guy” a little thin in the “And your point is?” department.

Credits: Written and directed by Geordie Day. A DarkStar release.

1 Response to Documentary Review — A hockey goon has his day in “Tough Guy: The Bob Probert Story”