Movie Review: “The Hate U Give”

More a good movie of its moment than a great film, “The Hate U Give” is a drama built on messaging and a hand full of terrific, emotionally-charged scenes.

It’s “The Black Lives Matter Movie” and more, a vivid if uneven and slackly-paced portrait of African American life and how American policing, too often, crashes into it.

And from its first moments, a scene in which a father (Russell Hornsby of “Fences”) gives his young children “The Talk,” about how a black person in America has to act when confronted by the police, the “keep your hands where we can see them” and “don’t act mad,” “Hate” reminds us it is a story with high stakes and today’s headlines immediacy.

Our heroine and narrator is Starr (Amandla Stenberg), a suburban Atlanta teen who lives in two worlds. At home, she’s part of an economically-segregated neighborhood, “Garden Heights,” where her ex-con dad (Hornsby) runs the local grocery, right next to the African American barbershop, the BBQ joint, a whole ecosystem of working class dreams hard against the drugs and other social ills of disadvantage.

Daddy has an activist bent, “Being black is an honor,” he reminds his kids. From childhood he drilled Black Panther politics into them, “Know your rights,” etc.

But during the day, Starr is the uniformed, braided put-together beauty in an overwhelmingly white private school. Her speech isn’t street, her manners, study habits and demeanor impeccable. The idea, she narrates, is “don’t give anyone a reason to call you ‘ghetto.'”

She has a white boyfriend (K.J. Apa) who she won’t let meet her parents, rich white girlfriends (Sabrina Carpenter, Megan Lawless) who pepper their talk with African American slang, which Starr never uses.

Weekend house parties in “the hood” can be rowdy and rough with her running mate Kenya (Dominique Fishback), the one who drags her away from Starr’s “Fresh Prince” re-runs.

That’s where she runs into her childhood crush, Khalil (Algee Smith of “Detroit”), overdressed and over-sneakered. When gunshots interrupt their party re-connection, he drives her home. He plays Tupac on the car stereo and explains “THUG Life,” the late rapper’s acronym for being raised in injustice is “The Hate U Give,” which comes back around with confrontations and violence in adulthood.

They’ve shrugged off the brawl that ended the party entirely when Freemont’s Finest pulls them over. Starr’s training from “The Talk” kicks in, but Khalil is annoyed at this “driving while black” hassle. It’s dark. He back-talks. He shows off. He gets shot.

“The Hate U Give” becomes Starr’s journey through grief and timidity to activism. 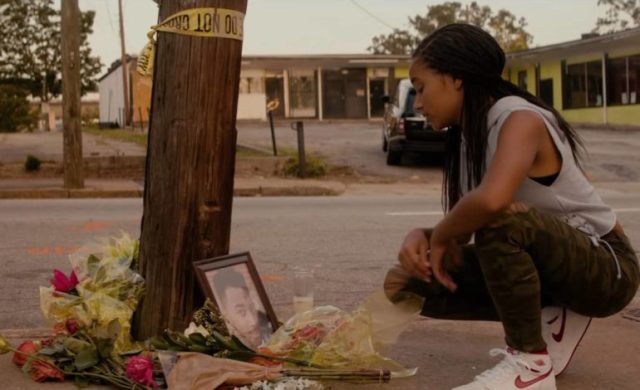 “Hate U Give,” based on the Angie Thomas novel, is the most pointed, high-minded George Tillman Jr. drama since “Notorious,” a director/producer whose ensuing film and TV work has been lackluster (“Soul Food,” “Faster,” “The Longest Ride”) and disappointing, to say the least.

He’s most at home here in giving us a lived-in milieu, a soul food restaurant with “A Black Man Can” sticker slapped on the fuse box, a long-established drug dealer (Anthony Mackie, hard and cold) with “history” with Maverick, Starr’s dad, where mom (Regina Hall) is the sober-and-concerned rock who nurtures and sets the family’s direction. Hornsby is the stand-out in this cast as he brings power and pathos to his turn as a father who has experienced this world’s blows and wants his kids to brace for fending them off.

Tillman pitches “Hate U Give” as “important” and “epic” in its running time and supposed scope, but it feels more haphazard and leisurely than  that. Watch the equally ambitious but tighter and more challenging “Monsters and Men” or even “BlackKklansman” and the filmmaking sophistication gap is glaring. There’s little style to “Hate,” and voice-over narration is the crutch of middling screenwriters and directors who indulge them. Film is a visual medium. Show us, don’t show us and then TELL us.

Starr keeps a “Nevertheless, she persisted” sticker on her locker and gets to smirk at how much of “my culture” her hip hop happy classmates embrace until push comes to shove and “Blue Lives Matter” is the reflexive fall-back position of “privilege.” We appreciate the duality of the character even if the story arc and performance don’t give equal time to both halves of Starr.

Stenberg, seen most recently in the unfortunate “Where Hands Touch” and before that “The Darkest Minds,” is still at the “pretty and romantic” stage of her career. The is about as “ghetto” as Keira Knightley. But her turn here takes on weight as the film progresses. We can see the callow PYT of “Everything, Everything” get better, right before our eyes.

The odd lighter moment doesn’t dispel the sense that “The Hate U Give” is burdened with hopes, expectations and “importance.” But Tillman and Stenberg lift their games enough that this doesn’t cripple the film or rob it of several wrenching moments of recognition, grief and “When will this ever change?” regret.

Credits:Directed by George Tillman Jr., script by  Audrey Wells, based on the Angie Thomas novel. A 20th Century Fox release.