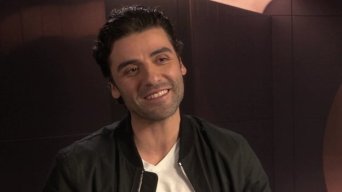 As I was sitting down to check out a Netflix comedy (“Win it All”), largely on the strength of the fact that Jake Johnson was in it, I had an epiphany.

Jake is, to me, hilarious, even in bad movies (“Let’s Be Cops”) or middling ones (“Tag”). I’ve been a fan since oh, at least “Safety Not Guaranteed,” maybe earlier.

And he looks like Oscar Isaac. More than a little bit, to be blunt. Yeah, they’re both Jewish (Jake Johnson Weinberger), both favor the stubble thing. I’m a big Oscar Isaac fan, too.

But Oscar Isaac, versatile singer, brooder, action hero (meh) that he may be, is not naturally funny. The whimsy’s not there. He’s supposed to be swaggering, swash-buckling in the “Star Wars” universe. Those are inherently funny characteristics.

And he’s not getting it done. He’s not alone in that regard, not laying the limp biscuit these movies are at his feet. But he’s illustrative of the problem.

Oscar and Jake look enough alike that my mind went, “What if they swapped Jake for Oscar in the future ‘Star Wars’ main storyline?” Just as a thought exercise.

Because if there’s one thing most of us seem to agree on, it’s that lighter touch that the Abrams-spawned films lack. And nowhere is that more evident than in the casting.

Go back to the original George Lucas films. Who’d he cast? “American Graffiti” bit-player who could do deadpan Harrison Ford. Mark Hamill, straight off a TV sitcom.

Abrams? He went for Daisy Ridley, John Boyega, Oscar Isaac and so on. Fine actors, or in some cases, fine enough. The light touch? None of them have it.

Donnie Yen of “Rogue One” is funnier than everybody in all the other films, including the “Solo” sequel, put together. Diego Luna was the closest we’ll see to that lovable rogue Ford turned Han Solo into.

Alden Ehrenreich’s comic chops were fine in “Hail, Caesar!” Kind of playing a “type” there, broad and cornpone. He’s not the least bit funny in “Solo,” nor is Ms. “Game of Thrones” or Donald Glover. Glover’s funniest as his rap alter ego, Childish Gambino, he landed some laughs on “SNL,” and he has the best potential to work out as a young Lando. But not funny enough in the movie.

Which probably won’t spawn its own sequel.

Maybe finding actors with a known light touch should be added to all the demographic check-boxes Abrams & Co. are plainly using when assembling these Disney products. More Jake Johnsons, less Oscar Isaacs.