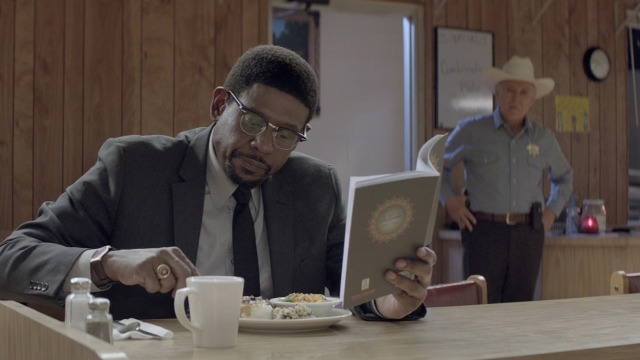 The crime happened eighteen years ago. William Garnett has paid his debt to society in a New Mexico prison. He converted to Islam, cleaned up his act and learned to control his temper.
That’s his hope. And his generally no-nonsense parole officer is willing to give him the benefit of the doubt.
But sending Garnett home to the border county where he grew up isn’t a good idea. There are  old associations to worry about. And then there’s the sheriff.
“The state granted him parole,” he snarls. “I didn’t.”
“Two Men in Town” is a stark modern day Western about a confrontation that we know is coming, a showdown we can feel from the opening moments as we glimpse, from a distance, a man smash another one’s skull in the desert along the Mexican border. Whose skull and who is smashing it is who this movie is about.
Oscar winner Forest Whitaker gives a tense, button-downed performance as Garnett, a guy who keeps his Koran with him, even at the stockyards, the only place that will hire him.
Oscar nominee Harvey Keitel is the sheriff who hasn’t forgotten the deputy Garnett murdered. Brenda Blethyn is the parole officer who just moved to the sunshine of New Mexico from Chicago.
And Luis Guzman is the local gangster Garnett used to run with, a guy who insists on renewing old ties with a devout Muslim who keeps politely refusing to let that happen.
Writer-director Rachid Bouchareb directed the 2006 Oscar nominated best foreign language film “Days of Glory,” about Algerian soldiers fighting for France in World War II. His “Two Men” is adapted from an Alain Delon 1973 French thriller of the same title. He’s given this updating a Western feel, a Muslim/Christian culture clash undertone and a border country illegal immigration subtext.
All of which should only enrich the minimalism of the drama.
But he rubs edges off the characters, giving everybody a reasonable tint. The sheriff cracks down on militias that want to hunt and capture illegals crossing the desert. The ex-con wants a new start, but still has the remnants of a violent temper.
And yet somehow, the pretty Catholic accounts manager at the bank (Dolores Heredia) lets herself fall for the new killer who charms her, in Spanish. Somehow, the indebted gangster won’t take ‘No’ for an answer to his entreaties and the parole officer and the sheriff, squaring off over harassing this ex-con, both seem in the right.
Characters turn into convenient plot contrivances.
The shades of grey here may mimic real life, but that doesn’t really work for Western showdown pictures. Bouchareb gets fine performances from several wonderful, under-utilized actors, including Ellen Burstyn and Tim Guinee in smaller roles. But his morality play is too muted to work, too muzzled to have any bite.