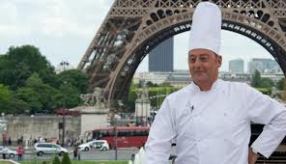 Jean Reno was born Juan Moreno y Herrera Jiménez in Casablanca to Spanish parents. But he is as French as a guy who moved to France at age 17 can be, as French as his stage name.
At home for decades in action films from “Leon (The Professional)” to “Ronin,” and in comedies from “French Kiss” to “The Pink Panther,” Reno, 65, has become Hollywood’s idea of what a French authority figure looks like, turning up in “Couples Retreat” or “The Da Vinci Code” – whenever someone quintessentially French is called for.
The fact that he’s maintained a thriving career in French films even though he’s moved to New York tells us the French look at him this way, too. His comedy “Comme un chef”, in French with English subtitles, makes its way here under the title “Le Chef” or “The Chef,” a foodie comedy that is earning variations of Australian critic Jim Schembri’s review — “souffle-light.”
We figured that being French, Reno was a gastronome. We had no idea how true that was until we caught up with him in New York.
Question: So, you play a famous, brand-name chef with his own TV show in this movie. How did you create the character?
Jean Reno: I am a friend of a lot of chefs, and I’ve watched them work the kitchen and work the dining room for years and years. They move a certain way, they approach the plate a certain way. Their relationship with the rest of their team is this way or that way. I observe because this world fascinates me. These people are artists, creative cooks. Sometimes, a little pretentious. Not very welcoming of suggestions from others, people like me who say, ‘Maybe you could do this that way, or whatever.’ No no.
Q: The French sometimes appear, to the rest of the world, as if you think you invented cooking. True?
Reno: The French cuisine was invented by chefs. It doesn’t come from the family, like Italian cuisine. Italian cuisine was made by “la mama,” from the house, food everyone grows up with. French food, almost every thing that makes up French cuisine, was developed by chefs, somewhere, at some time.
But today we can say that cuisine, that food culture, is a worldwide thing. In the north of Europe, in America, Japan, everywhere you have fantastic restaurants.
I live in New York, and I can take you to, let’s say FIFTY restaurants that would leave you more than happy. I have on my iPhone to guide me — my favorite dining apps. I don’t like to take big chances with finding a place, just go and oh, EAT something. I like to eat well. Not expensive. Well. I use these apps all over the world, at work, on holiday, at home. I swear by Michelin New York. Another app I love is LocalEats.
Q: The big debate at the heart of your film is over this newfangled “molecular cuisine,” food broken down to its essence, its scent and taste at a molecular level. How do you feel about that?
Reno: Oh, I am like my character in that regard. I don’t like the idea of having a syringe spritzing in a color, a scent, to fool you into thinking of something other than the food. I like regular cuisine, food that has been transformed by the talent of the chef — not by chemists. To me, that is a battle between the past and today. I like to respect the past.
We had the term nouvelle cuisine some years back. It turned up and everybody was like, ‘WOW. It is new! It is coming to us! They were doing something AMAZING and new!’ In fact, it was just a mar-KET-ing term to sell you more food, different food. I didn’t believe in it, and I still don’t.
Q: How do the French learn about great food?
Reno: I was very lucky. When I did my first tour with a play in France, I had this old character actor with me. He loved great food. And he knew the whole of France, addresses, chefs. Any time we had a stop on the tour, he had two or three great restaurants he knew. I caught on quickly. I started eating with him and I never went back.
To me, discovering fine food is like discovering opera. You need a guide to introduce you, to help you find your way.
Q: Your first reaction to American cuisine?
Reno: When I first came to America to promote “The Big Blue” (1988) with (co-star) Jean-Marc Barr, we traveled to 28 cities in 23 days. Very fast. But we used our time well. We tasted the hot dogs in every city we visited. Airports, street vendors. Hot dogs. I knew the best hot dogs, at least back then.
Q: Hollywood films are famous for their huge budgets, even for food. You work in both Hollywood and France. Who has the best catering on set?
Reno: No sense lying. The catering on French film sets is wonderful, even though the budgets over there are so very very small. Catering is suffering on sets over here and over there, too. The budgets, they cut down on the food. It is sad. So sad.
But you, in France, you have beer with your lunch, or pastis (a very alcoholic aperitif) even. Sparkling champagne. In America? It’s forbidden on the set!